8 Things I Love About Chicago

Prior to my trip to BlogHouse in Chicago in June 2014, I had traveled to Chicago two times, and in all honesty, I did not fall in love with the city. This is not to say that I did not like the city, I just happened to be visiting during the wrong season both times: winter.

Winters in Chicago are brutal. I thought that New York had it rough, but the winters in New York do not even compare to those in the Windy City. While I thought the city was charming during those visits, I did not want to spend much time outside because of the temperature, which meant that I ended up spending most of my time indoors and I did not get to do a lot of sightseeing. They say the ‘third time is a charm’, and it was during my third trip to Chicago that I really got to know the city and appreciate all that it had to offer.

On the east side of Chicago, you can find the beautiful Lake Michigan. Besides being very picturesque, the Lake is a great place to go and ride a bike, relax by the water, or just sit and watch the boats pull into the harbor.

One of my favorite places to relax by Lake Michigan was at the harbor directly across from the Buckingham Fountain. Another wonderful place to enjoy the Lake was from the Navy Pier.

A boat docked at the Navy Pier

In addition to the Navy Pier being an amazing place to view Lake Michigan, it is also home to a large ferris wheel, numerous places to shop, and a number of dining establishments.

The Lakefront is truly a wonderful part of the city and if you are looking for additional things to do on and near Lake Michigan, check out Frugal Frolickers list of ‘The 3 Best Things to Do on the Chicago Waterfront‘.

The 103rd  floor of the Willis Tower and Skydeck Chicago provide excellent 360° views of the city.

Not only do you have amazing views of Lake Michigan, but you can also see all of downtown Chicago and into the surrounding suburbs. The best thing to do at the top is to go out onto an encased glass ledge and literally look down at the city below you from an astounding 1,353 feet (412 meters).

Boating on the Chicago River

Cruising down the Chicago River

If cruising down a river screaming the lyrics from ‘I’m on a Boat‘ at the top of your lungs fulfills your lifelong sailing dreams, Chicago is the place to do it.

During BlogHouse I also had the opportunity to sail down the Chicago River with Chicago Electric Boat Company on a self-maneuvered boat manned by travel blogger Amber from With Husband in Tow.

If driving your own boat down a busy river does not seem appealing, you can also take one of the many boating tours that Chicago has to offer – check out this Yelp list for the best tours in the city. 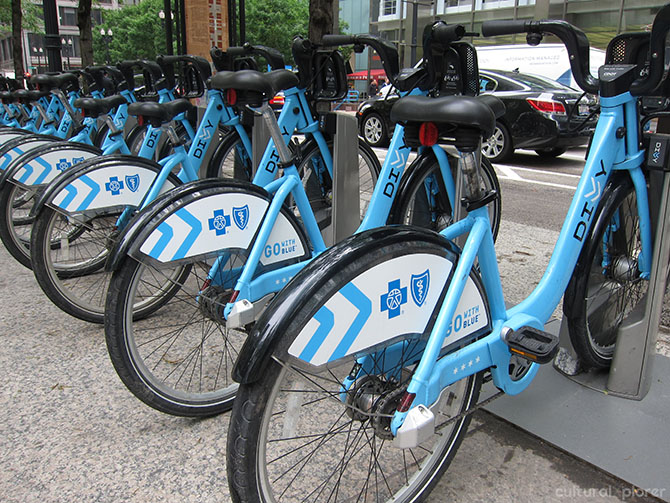 I love to bike around different cities and when I traveled to Chicago, I took part in the Divvy Bike program, which is similar to many shared rental bike programs across the world. I really appreciate the fact that Chicago’s infrastructure caters to bikers and there are bike lanes everywhere.

Millennium Park is absolutely gorgeous. Not only does it have the beautiful ‘Bean’ that I fell in love with, but is also home to a number of cultural events, beautiful flowers in the Lurie Garden, and an ice rink!

Inspired by the Latona Basin at Versailles, the Buckingham Fountain, one of the largest fountains in the world, was constructed to serve as the centerpiece of Grant Park, and it does a magnificent job at it. In person it is absolutely stunning!

Eating a torta in Pilsen, Chicago

I could not write a post about Chicago without mentioning all of the wonderful food you can find in the city. Although I previously went into the food scene in great detail, I thought it was definitely worth mentioning one more time. With its eclectic mixture of foods ranging from Mexican to Greek to Chinese, Chicago is definitely a food scene worth checking out.

Have you been to Chicago before? What were some of your favorite things about the city?

FTC Disclosure: A special thank you to Skydeck Chicago, Chicago Electric Boats, and Divvy Bikes for the complimentary admission and rides during my stay in the city of Chicago. While I was provided with complimentary access, all opinions in this article are entirely my own.