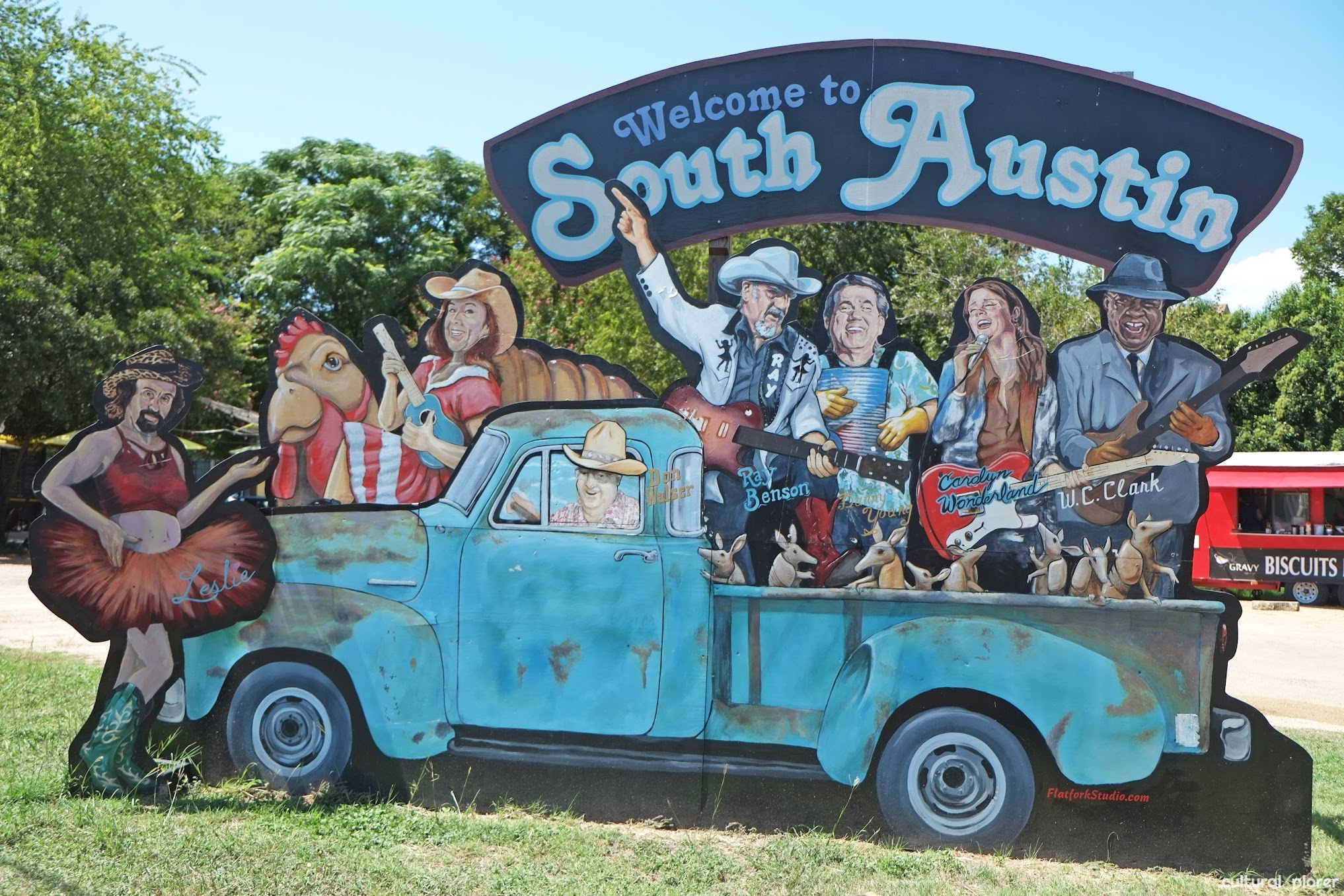 The day after I arrived in Austin, Texas, I joined a walking tour of South Congress Avenue with Austin Eats, a food tour company that highlights local Texas born establishments throughout Austin.

I decided to take a food tour during my short trip to Austin because there are so many amazing places to eat in the city that it would take a lifetime to eat my way through it! I felt that one of the best ways to get an introduction to Austin’s culinary scene was to take a tour of it so that I could sample a lot of food in a short amount of time. 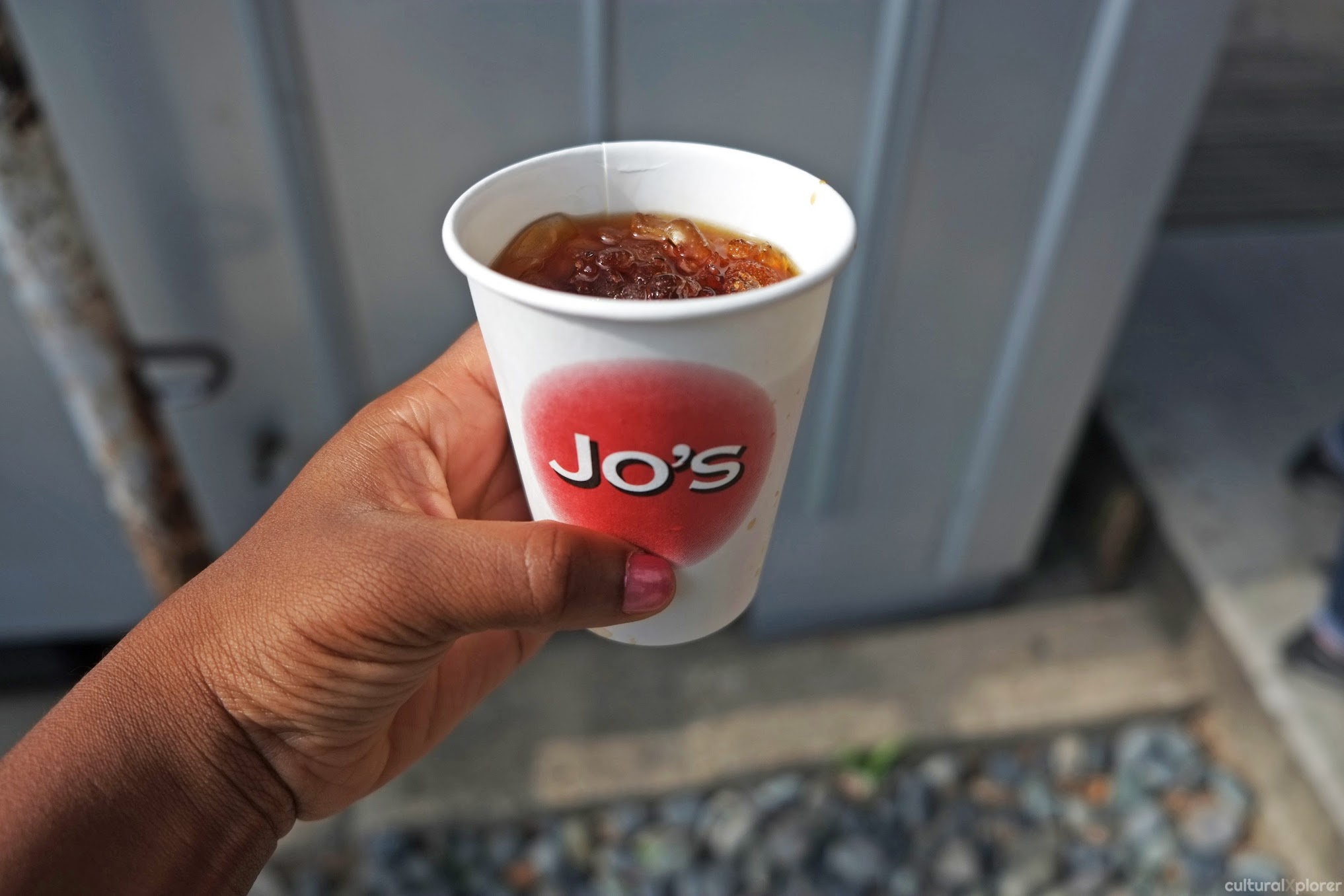 I met my tour group bright and early in front of the ‘I love you so much’ wall plastered onto the side of Jo’s Coffee on South Congress Avenue.

When I arrived, the tour guide (and company owner) Andy greeted my group with cups of Jo’s iced coffee, which was a cool and refreshing way start to our journey.

Everyone in the group formed a semi-circle as we introduced ourselves and talked about some of our favorite foods. Andy then proceeded to give us a brief history of S. Congress Avenue and a rundown of the stops we would make on the tour before we headed to our first official stop: Snack Bar. 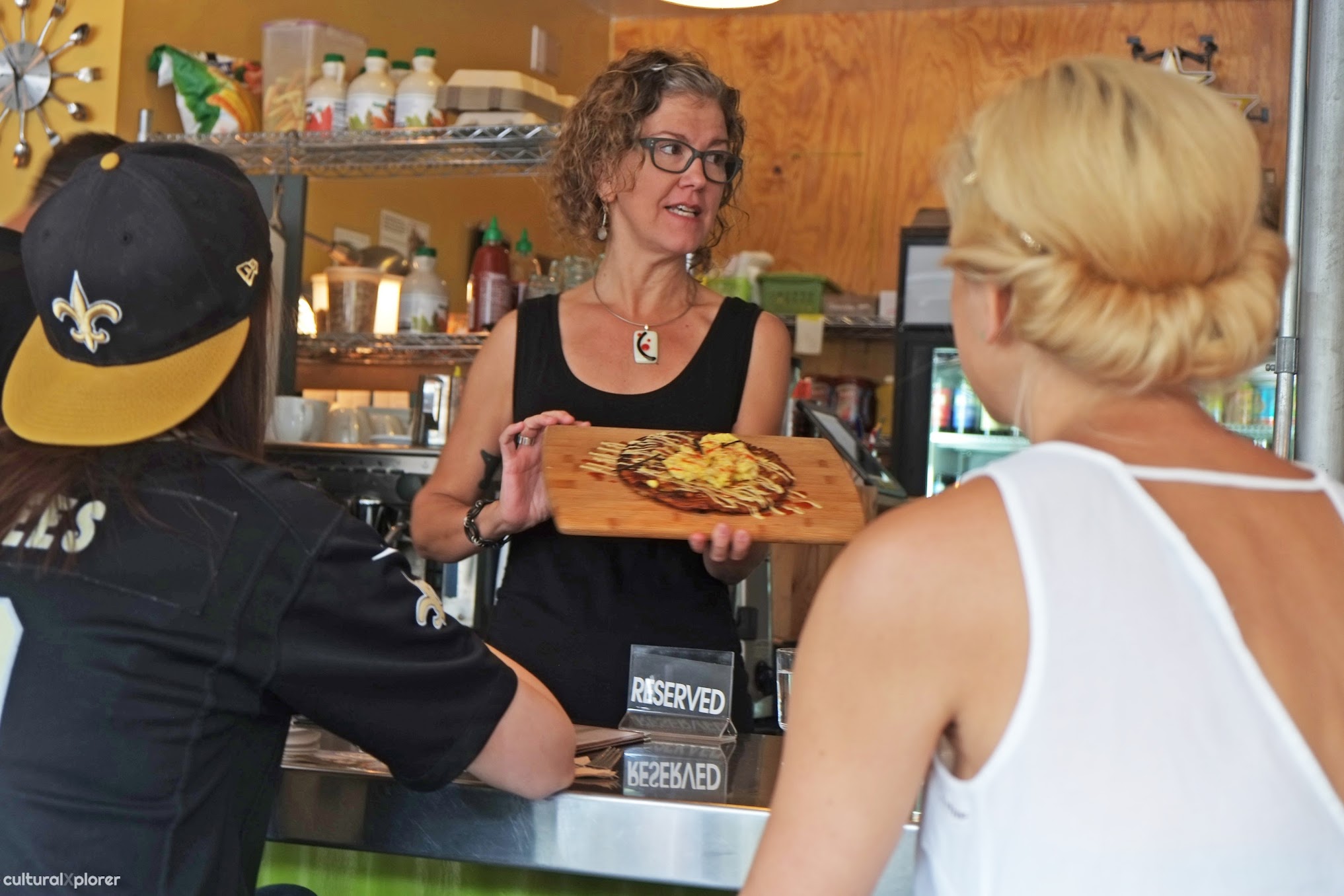 Located across the street from Jo’s is Snack Bar, a casual eatery that offers globally inspired, locally grown, ethical foods. The restaurant’s menu is very eclectic with influences from America, Mexico, and Asia.

At Snack Bar, we were served one of their signature dishes, ‘Tamago Yoko’, a savory hash-cake whose inspiration comes from the Japanese dish called okonomiyaki.

Traditionally, Snack Bar’s Tamago Yoko is comprised of Niman ranch bacon, gulf shrimp, cabbage & leek hash cake, two over-medium eggs, with wasabi aioli, sriracha, bonito, and nori; however I ate the vegetarian option (sans bacon and shrimp), and I found the dish to be an interesting play on its Japanese predecessor. 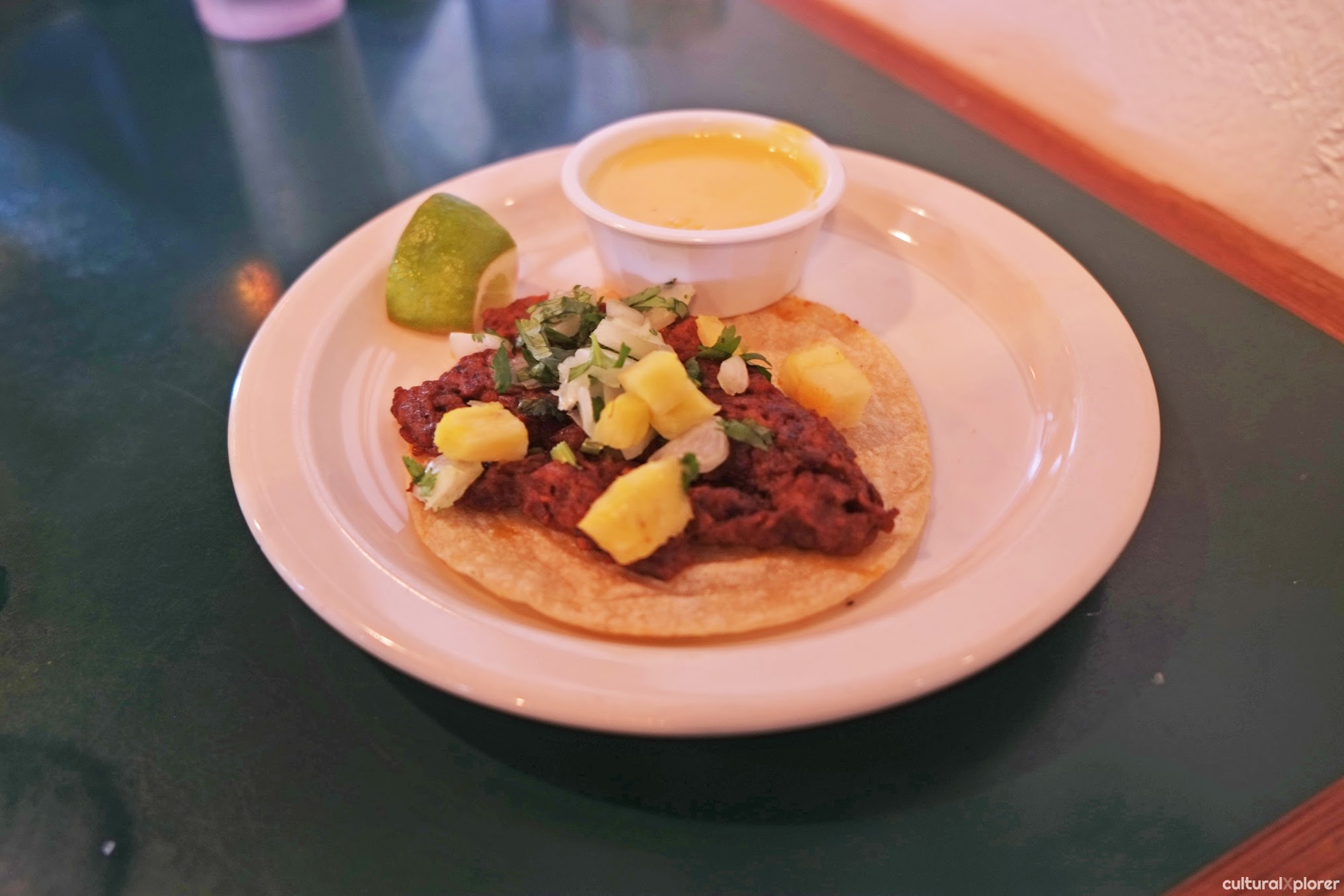 The next stop on the tour took us a few doors down to the popular taqueria named Güero’s Taco Bar, where I ate a Soy Taquito Al Pastor. The taquito (or small taco) was comprised of soy chorizo, cilantro, onions, and pineapple on a corn tortilla; and it was accompanied by a small fresh hand-shaken margarita.

One thing that I really liked about Güero’s was that they offered a vegan menu for the non-meat eating folks. Although I am not a vegan or vegetarian, I liked that that option was available in case I wanted to switch it up. 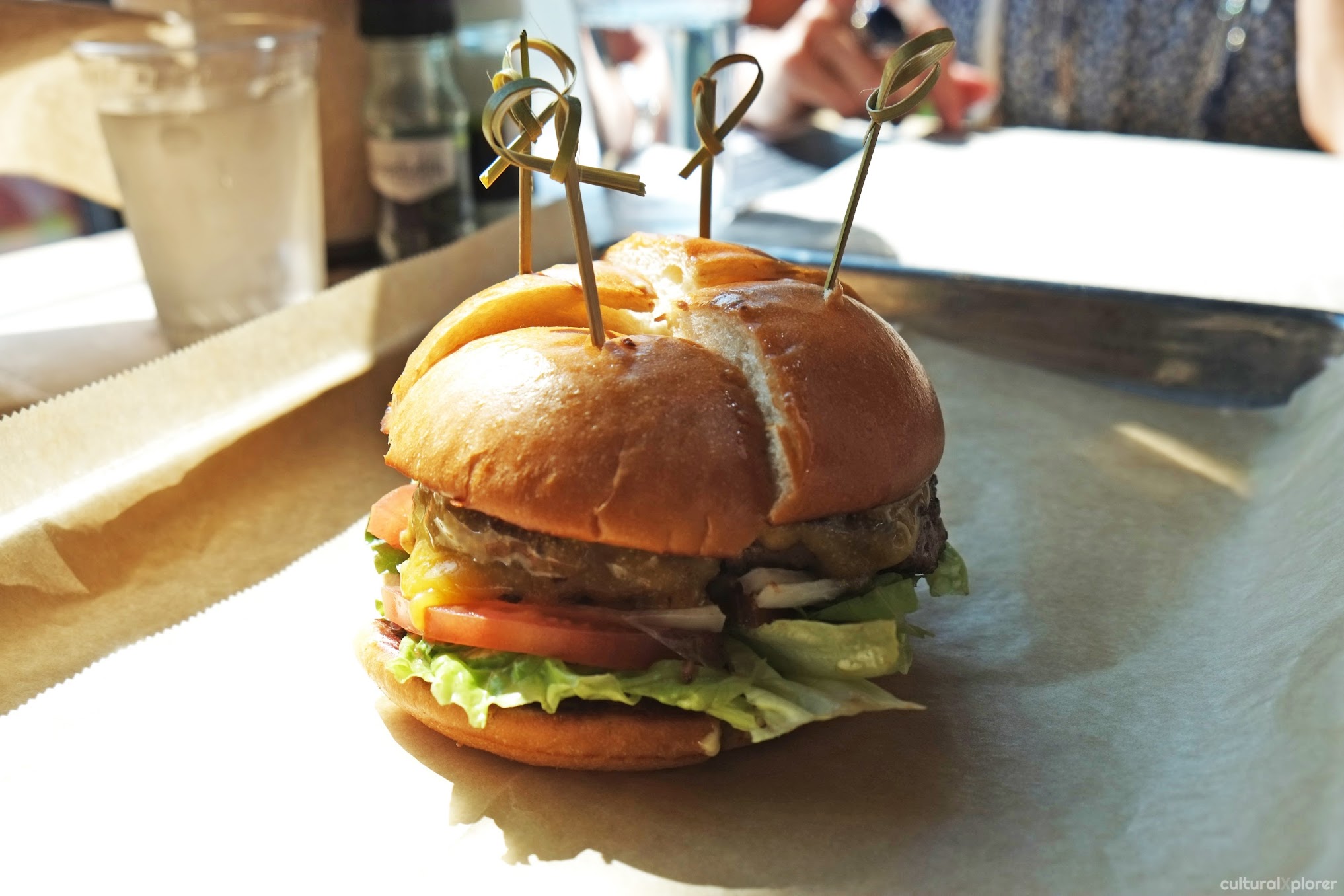 Before visiting Austin, I created an extensive list of places that I wanted to eat at in the city. Hopdoddy Burger Bar was one of the top places on my list, so when I found out that we would be visiting Hopdoddy on the tour, I was internally jumping for joy!

I have to say that Hopdoddy’s burger ranks pretty highly as one of the best burgers that I have ever eaten. To wash down my delicious burger, I had a refreshing Bubbly Blonde, which was comprised of house-infused St. Germain, lemon, orange, and bubbles – and it was yummy!

If you are ever in Austin, do not skip this place. 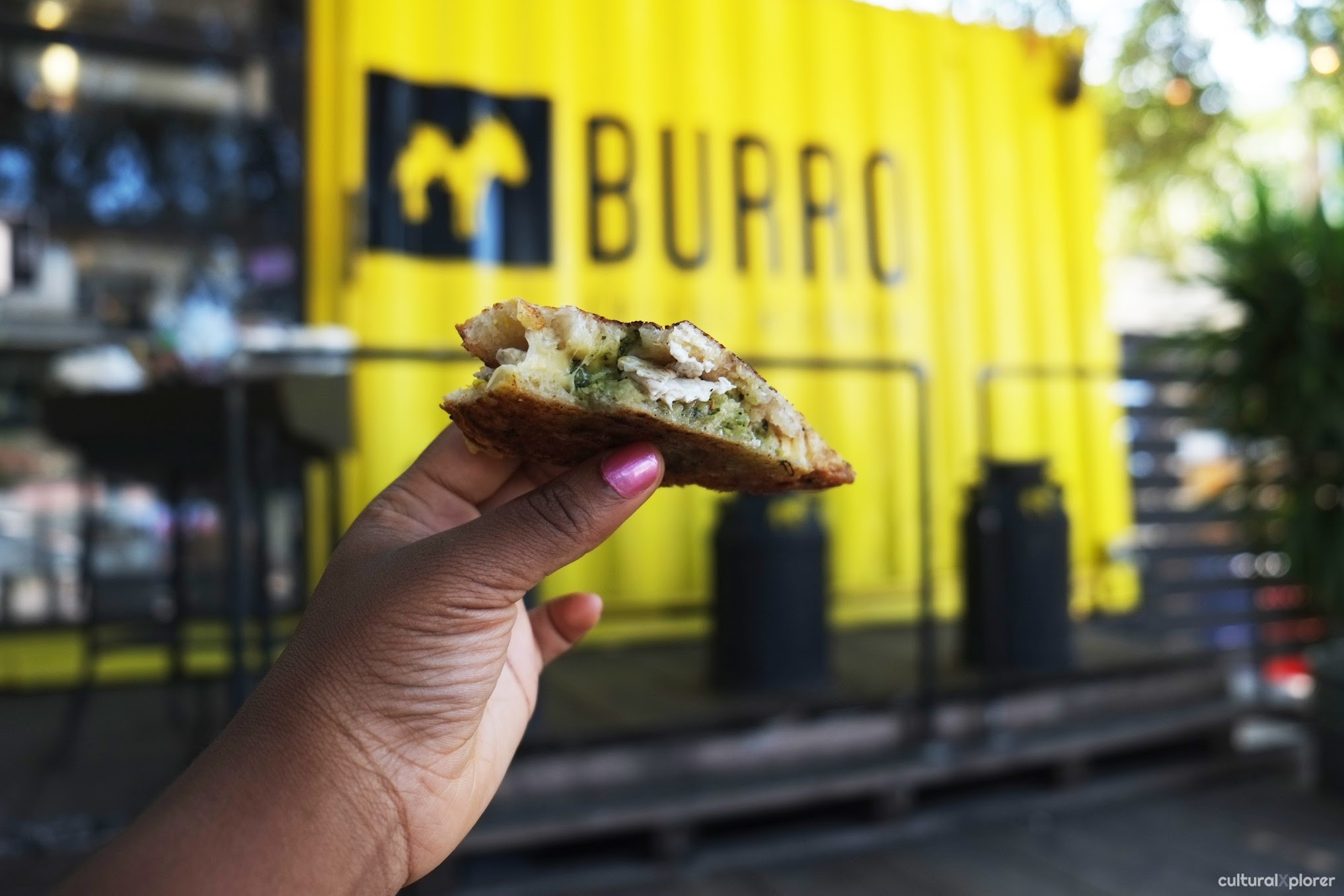 By this point on the tour I was starting to feel myself getting pretty full, but I could not pass up the opportunity to eat grilled cheese at Burro Cheese Kitchen, a food truck that specializes in unique grilled cheese combinations. 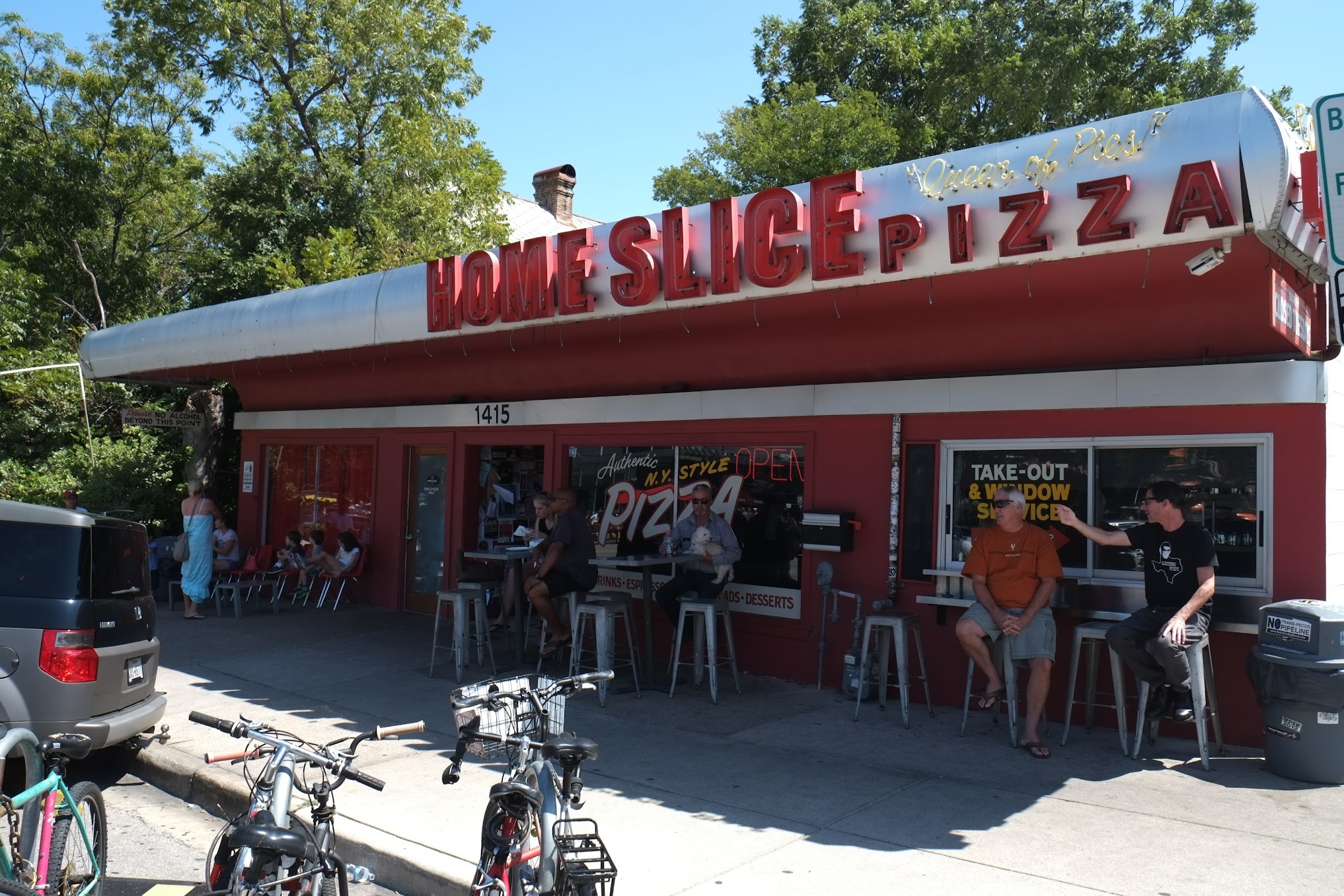 The final stop on the tour was to the popular Home Slice Pizza, which specializes in ‘New York Style’ pizza.

I got so wrapped up eating and chatting with people on the tour that I completely forgot to take a picture of the slice (#bloggerfail). Although Home Slice’s style looked like New York pizza,  the taste was not exactly the same because let’s face it – no one can completely replicate New York pizza due to the unique flavor NYC water provides each slice making it difficult to duplicate elsewhere.

Despite not being exactly like NY pizza, Home Slice did have a pretty delicious slice of pizza, and I would definitely eat it again during another visit to Austin.

The South Congress Walking Tour takes place every Sunday at 10:00 am and consists of food tasting for 2.5-3 hours. The tour costs $65/person and includes all food and drinks (with the exception of those not specified, like my cocktail at Hopdoddy).

For more details and to see the other food tours Austin Eats offers, check out their website.

FTC Disclaimer: I was a guest of Austin Eats during my trip to Austin. Even though I got to chow down at no cost, all opinions in this article are my own.

Have you ever been on a food tour in Austin before?