What to Do in Battambang, Cambodia

The city of Battambang (meaning ‘Disappearing Stick’ in Khmer), lies to the north of Phnom Penh and to the west of Siem Reap. When visiting Cambodia, many people often neglect visiting the city, which is the second largest in the country of Cambodia following Phnom Penh. Why so many people forgo traveling to Battambang is unclear, but there are a number of things to do within and around the city that will you keep one busy for at least a couple of days.

What to See and Do in Battambang

Located 7km outside of the city, Wat Ek Phnom is a destroyed temple that was built in the 11th century. Today all that remains are the ruins of the temple. Like a lot of the sites around Battambang, there are almost no people around so no one has to battle for space or photographic opportunities. Photographic opportunities are excellent as the evening draws near and as the shadows hit the remaining walls as the sun begins to set. To get there, one can take a motorbike or a tuk-tuk. As of March 2012, Wat Ek Phnom has a $2.00 admission fee.

Located 25km outside of Battambang, Banan Temple has been compared to a miniature Angkor Wat, however Banan predates Angkor Wat by about 60 years. Comprised of five temples, Banan is  on the top of the mountain and can be reached by climbing nearly 350 steps.

One of the more popular things to do in Battambang is to ride a bamboo train. It is an exhilarating experience where you are sitting on a piece of wood (the ‘train’) and you speed down a track through the countryside while the wind blows through your hair. 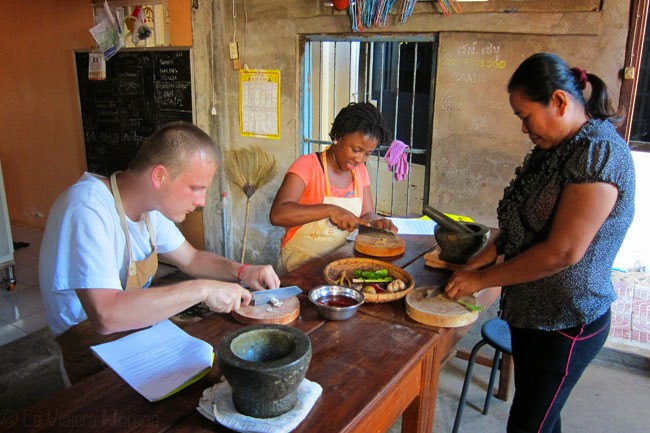 I took a cooking class at Nary’s Kitchen with the sweet owner Nary. The class started with us visiting the Central Market to pick up the ingredients we were going to cook with. After choosing the ingredients, we headed back to the school and cooked a delicious meal with the sweet owner Nary. The class is very affordable and you even get a free recipe book to take home with you to make your own Khmer dishes.

I took a bike tour with the company Soksa Bike. The tour provides you with the opportunity to ride your bike outside of Battambang City and into the local villages to witness how villagers create rice paper, dried bananas, wine, and you can witness their daily way of life. For information on booking a tour, check out their website.

Are you interested in finding out more about Battambang? Check out the following site for more information: