Embracing the Beer Culture in Munich

Beer is as much a part of German and Bavarian cultures as pasta is to Italian culture, American football is to American culture, and chopsticks are to Korean culture; it is deeply ingrained in the history and traditions of the country and something that the country is known for. Beer is such a large part of the culture, in fact, that along with Schnapps, it is considered one of Germany’s national drinks!

Germany holds the world record of having more brands and varieties of beer than any other country, boasting over 5,000 brands and 40 different types of flavors! If you are a beer enthusiast, Germany should definitely be added to the list of places that you visit when you travel to Europe!

When I traveled to Munich, Germany during my 2014 Euro-Trip, I had one major thing on my mind: to experience the German beer culture.

During my week in the city, I made sure to visit a number of different biergartens and restaurants to experience some of the best beer that Bavaria had to offer.

Hacker-Pschorr is a Bavarian beer brewed in Munich whose roots date back to the early 15th century when the company operated under the name Hacker Brewery.

In 1972, the Hacker Brewery and the Pschorr Brewery merged forming the now-famous Hacker-Pschorr Brewery. Today, Hacker-Schorr is one of only six remaining big breweries located in Munich. 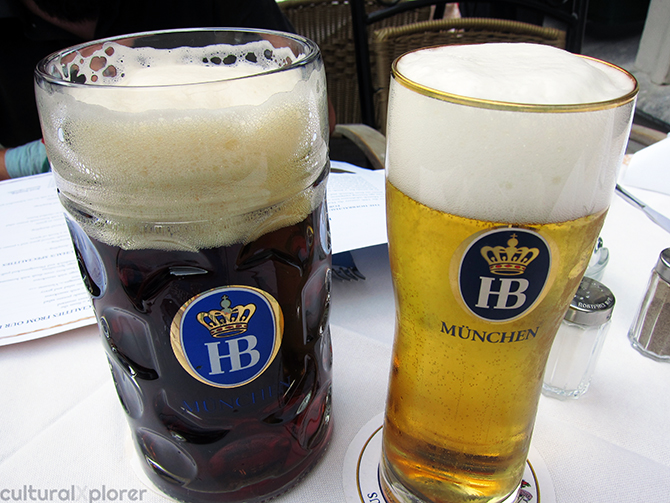 Hofbräuhaus is a Bavarian brewery located in the city of Munich. When Hofbräuhaus first opened its doors in the late 16th century, only Bavarian royalty was allowed to patronize and drink the beer. In the 17th century, Bavarian ruler Maximilian I allowed the beer to be produced and sold to the masses, and finally, in the 19th century, the doors of the Hofbräuhaus were opened to the public.

In the early 20th century, the Hofbräuhaus became infamous for being the location where Adolf Hitler delivered one of his first speeches attempting to recruit people to join the Nazi party. It is also said to be where Mozart wrote his famous piece entitled Idomeneo, and where former US President John F. Kennedy unsuccessfully tried to smuggle out a beer mug.

Today, Munich’s Hofbräuhaus sees thousands and thousands of visitors annually and it’s operations have expanded outside of Germany and into the United States, where there are a total of 8 restaurants and brewpubs.

Augustiner is Munich’s oldest beer manufacturer whose origins date back to the late 13th century when it was brewed inside of the monastery of the Augustinian Brotherhood.

Augustiner is probably one of the most famous and well-liked beers by Munich residents with restaurants all over the city serving the Augustiner beer. Due to its popularity, the Augustiner brewers do not have to spend any money on advertising, the people in Munich do all of their advertising for them through word-of-mouth, which is how I found out about them.

Today, the German Augustiner beer (not to be confused with the Austrian Augustiner) can be found around Europe and in the United States.

Paulaner beer dates back to the 17th century where it was created by the friars in the Munich monastery Neudeck ob der Au. Out of all of the breweries in Germany, Paulaner ranks in the top 8; their beer is just that good.

Today, Paulaner beer can be had not only in Munich, but across 6 continents in places such as China, Russia, Singapore, Portugal, Australia, and the United States.

The two other big breweries in Munich are the Franziskaner and the Löwenbräu.

Drinking at a Biergarten or a Beer Hall in Munich

Service: In a Biergarten waitress service is only provided at tables with tablecloths, otherwise, there is self-service (most common) from little beer and food shacks. For self-service, you must go up to a window and order the type of beer and/or food that you want, pay the cashier, and then find a seat. In a beer hall, you are provided with waitress service.

Family-Style: Drinking is very much part of the culture in Munich, and it is not uncommon to see playgrounds at the biergartens where families bring their children to play while they consume their halbe or maß.

Where to Drink in Munich

Beer can be found pretty much everywhere in Munich from restaurants to beer halls, to parks, to biergartens. Here are some suggestions to narrow down all of the options you have when visiting the city:

Have you ever experienced Munich’s beer culture? Share your story below!