I have been on my share of food tours, but the Eating Prague Food Tour that I took during my trip to Prague outdid itself. I walked away from the tour feeling like I had eaten a boatload of food and swore off eating for the rest of the day for fear that I would no longer be able to fit into any of the clothes I had packed for my trip.

With a few minutes to spare before the tour began, I arrived to the Galerie Le Court, a hidden courtyard in the center of Prague.

When I sat down at the table with the other tour participants, the guides introduced themselves and told us that the first thing that we were going to be eating was apple strudel (jablečný závin). The strudel looked like it was going to be very sweet, but it was not. In fact, it had just the right amount of sugar and tasted like it had been freshly baked that morning.

After we finished inhaling our apple strudels and licking our forks clean,we headed over to Sisters, which is famous for their open-faced sandwiches (chlebíčky). We were given four different types of sandwiches to try, but I started to get full after eating the second. I wondered how I was going to make it through the food tour when I barely had any room left in my stomach for all of the food that we were being provided.

For the next meal, we did not have to go very far since the next food stop was across the hall at Naše Maso, where we sampled a variety of fresh meats, butchered right on the premises by local artisan butchers. My favorite was the Czech “Fleckvieh” beef. 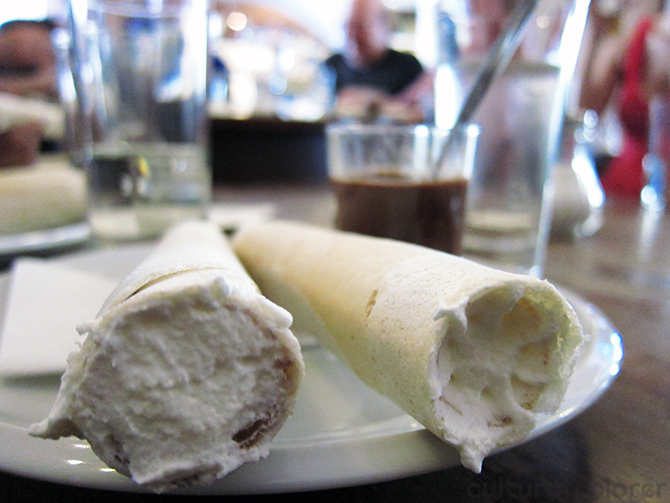 The next stop required a bit more walking and talking to burn off some of the food that we had just devoured. The food tour became a little bit of a walking tour mixed in with some history and Czech culture. Along the way to the next stop, we looked at some famous buildings and monuments around the city and discussed their importance to Prague.

We arrived at the family-owned Choco Café U červené židle to eat specially made Hořice rolled wafers, which were the favorite treat of Napoleon and can only be made in the small town of Hořice in the Czech Republic.

The tradition for eating the food is to dip the cream-filled wafers in chocolate before eating them. It was fun trying to eat the wafers while trying to prevent the cream from coming out at the other end when you bit into them and it reminded me a little bit of the time that I dipped churros in chocolate when I visited Madrid.

The next stop on the tour was to Novoměstský Pivovar (Novoměstský Brewery), where I got certified in brewing Czech beer (seriously, I have got the certificate to prove it).

When we arrived, we learned about the different ingredients that go into beer, talked about the beer culture in the Czech Republic, and saw the entire beer-making process. It was really interesting to see how intricate the beer process was and how a lot of love went into each batch to make sure that it was perfect.

After becoming certified beer makers,we headed to what Eating Prague refers to as ‘a well-kept secret of Prague’, a restaurant in a bell tower overlooking the city.

The restaurant, Restaurant Zvonice, was definitely one of my favorites from the day. I loved being able to look out over the city while eating my sauerkraut soup. I realize that sauerkraut soup does not sound like something many people would be interested in eating, but it was actually very delicious. 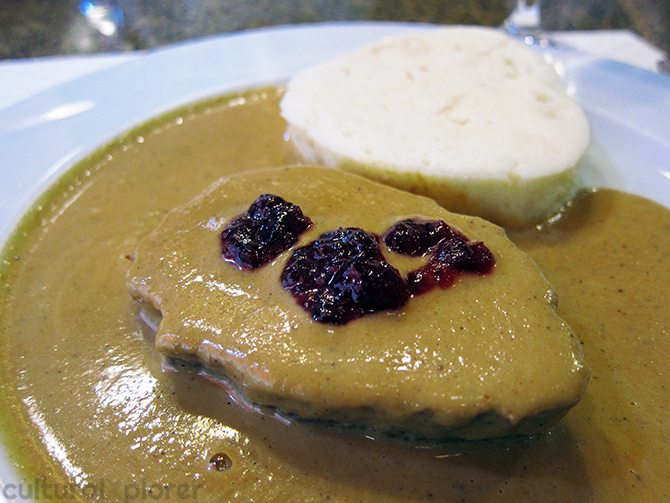 The final stop on the food tour was to a beautiful restaurant that looked like it was part of a movie set: Café Imperial.

We had a very traditional meal of dumplings, braised beef, and cranberry compote (Svíčková na smetaně) which was both delicious and filling. By this time I was about to fall off of my chair from overeating and I joked with the guides that they would have to roll me out of the door.

We said our final goodbyes to the people we had shared several meals with over the course of four hours, and we talked about what our favorite parts of the tour were. Many people, like myself, agreed that they loved and were surprised by the sauerkraut soup.

Our guides then pointed us to the back of the book that they had given us, which listed some green spaces we could visit, and additional suggestions for beer and restaurants around the city.

I thoroughly enjoyed this tour, the guides were knowledgeable and gave us not only food lessons but cultural lessons as well. As a solo traveler, I always find tours to be a great way to meet people, and this tour was no different; I met other solo travelers and a couple of couples from around the world. It was truly an enjoyable experience.

The end of the tour at Cafe Imperial

Disclosure: I was a guest of the Eating Prague Food Tour however all thoughts and opinions as always are my own.