How To Celebrate The Festival of San Fermin

I arrived alone to the Plaza del Ayuntamiento around 7:30 am on Friday, July 12. The street was already full of runners preparing themselves for the encierro (run with the bulls) at 8:00. I talked to a few guys from Canada and a guy from the Wisconsin about the run. The guy from Wisconsin said that it was his first time and I told him that it was also my first time as well. Both of the Canadians had run before and their advice to me was not to fall. They said that the people were usually more dangerous than the bulls because they were more concerned about running from the bulls and not about the people around them getting trampled. They also told me that when nearing Dead Man’s Corner that I should stay to the right side as to not get hit by bulls as they slide around the dangerous corner.

I heeded their advice and moved from the center of the plaza over to the right side. My body was literally trembling at the thought of not knowing how the day would turn out, and if I would be injured or live to tell this story. About five minutes before the bulls were released, people began moving forward, and I thought this was a good idea so that I would not get stuck in Dead Man’s Corner.

The balconies along the route were also crowded and filled with onlookers who watched from a safe distance as the bulls ran through the course. You could feel the tension and the excitement amongst the runners in the street knowing that in a few minutes we would be barreling down the street attempting not to get gored or trampled. People were jumping, stretching, chanting, and talking nervously while counting down. The police were throwing out anyone who appeared to be intoxicated and they were not allowing us to take pictures (I snuck in a few when I did not see any police around).

As I was waiting on Calle Estafeta I saw people start to jog. The people around me stood still and up against the wall. I did not know whether or not I should also begin to jog, so I started to jog slowly down the street. That’s when it happened: the first rocket went off, signaling that the bulls had been let out. I began to run and then I slowed down when I realized the bulls had not yet reached the area I was in. When the second rocket went off signaling that all the bulls had been released, I took off running. I decided that maybe being directly on the street wasn’t the safest place to be and I moved closer to the right hand side and the on-lookers. I stopped against a fence as I saw five bulls rushing past me. I thought it was over until I heard someone yell that there was one more. I ran around the Telefonica curve and into the area of the Callejon when I saw a large mass of people running followed by a bull. I immediately ducked under a fence and away from the madness of ensuing around me. The bull stopped right in front of me and people began taunting him. He started to charge towards them and they jumped over the fence.

As I was behind the fence taking pictures, I turned around and saw that the man behind me was being treated for a very large puncture in his arm. The man treating him was pressing firmly on the wound with a piece of cloth. It was a little nerve-wracking knowing that a man was injured so close to me.

During that same night, I attended the bullfight, which was the first I had seen and will most likely be my last (unless the death of the bulls is not a part of the event).

At the bullfight before it began

Outside of the run, the bullfight, and people-watching, I did not attend any other events in the large festival, however there are hundreds of thousands of people who descend into Pamplona during the eight day festival to participate in the activities (a full list of which can be found here), and there is something for everyone from the young to the old.

Interested in attending San Fermin? Here are some things you need to know…

Getting to San Fermin:

Getting to Pamplona is quite easy and can be done by plane, train, car, or bus. The city is landlocked so getting in by water is not possible.

What To Wear to San Fermin:

During the eight day period, about 95% of the people you will see will be wearing a white top , a white bottom, a red sash around their waist, and a red bandana around their necks. If you are not wearing the attire  you might feel quite out of place, as I did when I arrived on my first day.

If you do not own any of these items have no fear, the majority of the shops that stay open during the festival sell all of the pieces for around 20 euros (I even got a custom made shirt for only 8 euros!). 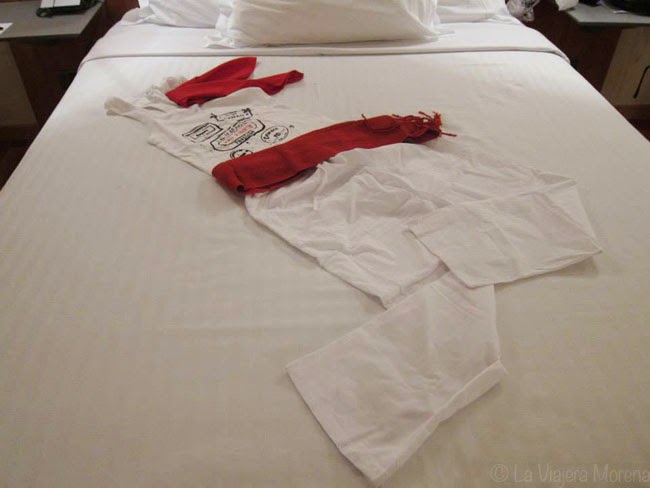 If you are interested in running in the festival, you should arrive NO LATER than 7:30 am and proceed directly to the ‘Plaza del Ayuntamiento’ where you can join the other runners.

Understand: There are some strict guidelines you should also adhere to because the run is extremely dangerous and the bulls are capable of killing you:

It is not necessary to train for the run unless you are not in good physical condition/ you plan to start from the very beginning (which includes running up a hill)/ you start before Dead Man’s Corner. Most people (such as myself) have no training before the run and complete it without any problems. Do what you think is best.

Watching the Run at San Fermin

If you decide you would just like to watch the run, you can see it from a balcony (for a price) or you can watch it from the ground (you need to get there extremely early to secure a spot for yourself), however it is not possible to stand inside of the race course.

To rent a space on a balcony, do a Google search for ‘San Fermin balconies’ or wait until you arrive and look for the notices posted around the city.

Where to Sleep During San Fermin

Prices in Pamplona during San Fermin are outrageous and can be up to triple the normal prices, and this includes everything from food to  hotel rooms. This is a good time to use free hotel nights or excess miles if you can spare them and of course book way in advance to guarantee that you will be able to get a room.

If you opt for hostels, the cheaper ones can be found when you arrive to the city and generally not on the internet. If you prefer CouchSurfing, you will have a hard time finding a host. If you prefer free accommodation, find a quiet space in a park, on a bench, or in a corner somewhere like many people do when they arrive.

Have you ever participated in San Fermin or do you want to? Share below!