A Cultural Exploration of Fried Chicken 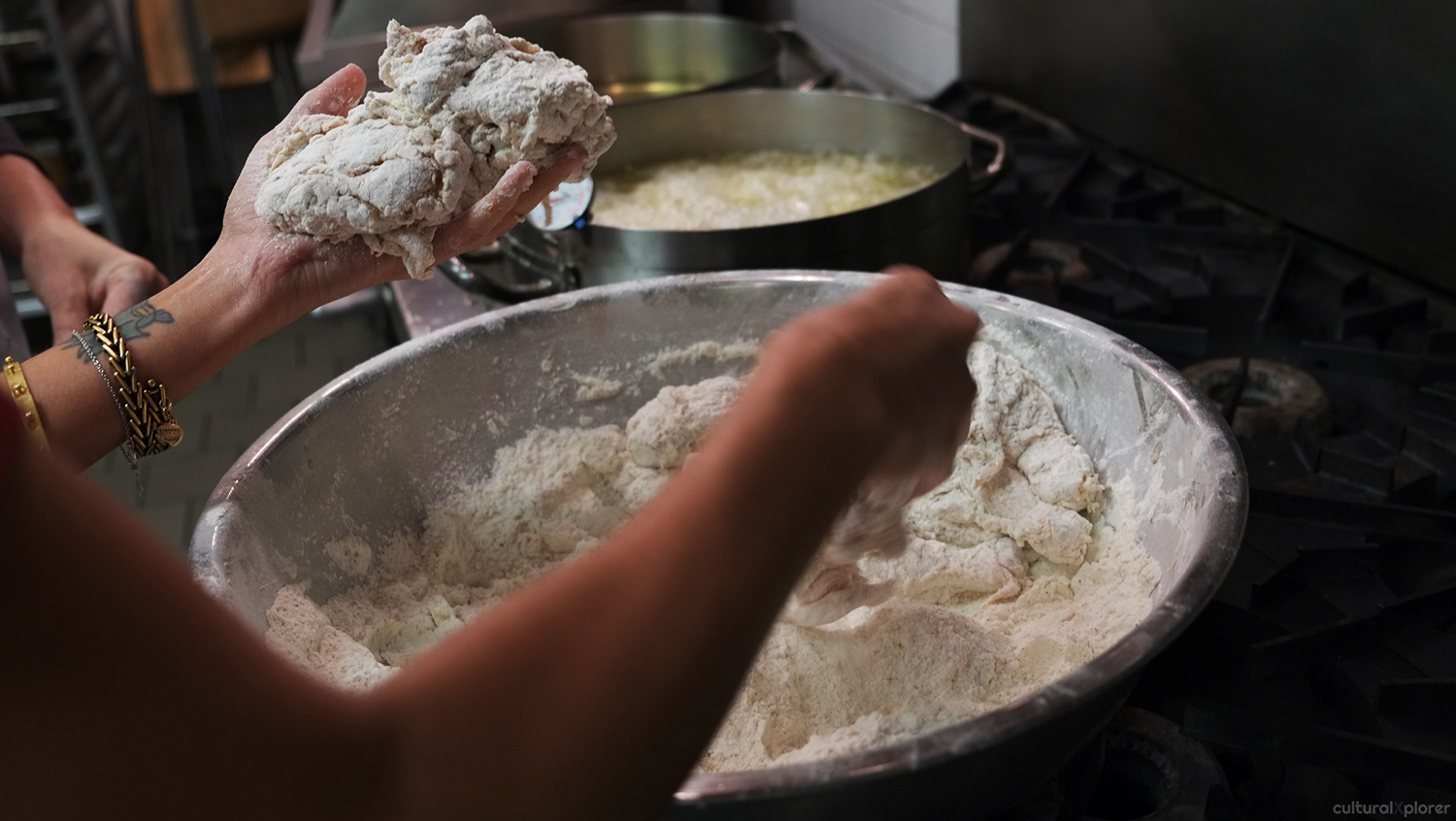 As a teacher, I can attest to the fact that the best way to learn how to do something is through hands-on experiential learning.

Prior to attending a recreational cooking class at the Institute of Culinary Education with Chef Daniel Stone, I had never fried a piece of chicken in my life. By deciding to take a fried chicken cooking class,  I got the experiential learning that I needed to fry chicken with confidence.

The thought of cooking fried chicken in the past used to scare me. Some people fear cooking a Thanksgiving turkey, I had a somewhat irrational fear of getting third-degree burns from hot chicken oil popping out of the pot and onto my skin.

When I decided to take the fried chicken class, my fears were relieved as I learned two important lessons: how to properly cook fried chicken and how to safely prepare the chicken to avoid food poisoning.

When preparing chicken dishes, it is always important to keep your hands clean to avoid spreading salmonella. Make sure to wash your hands whenever you finish touching raw meat before you handle something else.

Finally, if you are using a cutting board to slice your meat, try to cut and chop all of the non-meat ingredients first, to avoid cross-contamination.

When frying chicken, it is a good idea to wear long sleeves and something to cover your neck to avoid getting burned. Additionally, when frying your chicken, use a

Chicken Chicharron (Chicharrón de Pollo) is a Caribbean dish that originated in the Dominican Republic.

These crispy little chicken nuggets can be found all over the country and are comprised of ingredients such as rum, lime juice, soy sauce, and paprika.

Out of all of the chicken that I consumed in the cooking class (and there was A LOT of chicken consumed), this was definitely one of my favorite dishes.

A signature dish of Puerto Rican culture that is typically eaten on holidays, Arroz con Gandules packs in powerful flavors like achiote oil, sofrito, pork, and cumin, that are cooked in the same pot as the rice.

After having lived in Korea for two years and consuming a large amount of Korean food, one thing I know is that Koreans love fried chicken; so I found it very appropriate that Korean fried chicken was added to list of foods we were taught how to cook.

The ingredient that gives Korean fried chicken its spicy kick is a sauce called gochujang (Korean red pepper paste), which is the main ingredient in many spicy Korean foods.

Yes, that’s right – General Tso’s chicken does not originate from the Hunan province in China, although it is marketed as a Hunan dish. In fact, if you were to bring the chicken the Hunan region, they would have no idea what it is.

Named after General Tso Tsung-tang of the Qing Dynasty,  General Tso’s Chicken was created in New York City by Taiwanese chefs in the 1970’s and quickly became popular with American diners because of its unique sweet and spicy taste. Today, General Tso’s chicken is still one of the most popular dishes at Chinese restaurants in America.

Interested in trying some authentic Chinese food in NYC? Head over to Flushing, Queens!

Many people think that fried chicken originated in the American South, but it did not. Fried chicken was cooked in Western Europe and Asia long before it made its way to the United States.

For clarification purposes, Southern Fried Chicken originated in the American South. Its American roots were created during the time of slavery when slaves were provided with chicken, which they then fried to prevent it from getting spoiled before they ate it.

Being a descendant of African slaves, I grew up eating fried chicken. It has become entwined not only with the history of my family but also with the culture of African-Americans.

When waffles are paired with fried chicken, it is a match made in heaven that blends savory and sweet flavors. Originating in Wells Supper Club in Harlem, NY and popularized by Roscoe’s Chicken and Waffles in Los Angeles, CA, chicken and waffles are the perfect combination for breakfast, lunch, or dinner.

The Buffalo Wing is an all-American food that was accidentally created in 1964 at the Anchor Bar and Restaurant in Buffalo, New York.

Prior to buffalo wings being used for food, they were discarded as they were seen as the least desirable part of the chicken. Today, Buffalo Wings are synonymous with bars and sports, particularly the Superbowl.

A tip for making buffalo chicken wings: Separate the first and second joint of the chicken wing using a chefs knife and discard the wing tips before frying them.

Last but not least is Ramen Coleslaw.

Although the origins are unknown, this unique side dish is simple to make and pairs very well with fried chicken.

After a couple of hours of cooking, it was time to eat!

What would a good dinner be without cherry-infused vodka lemonade?

The Institute of Culinary Education, New York City’s oldest culinary school, offers numerous recreational cooking, baking, and wine & beverage classes, along with tours and international trips. Check out their complete listing here, and tell them that Cultural Xplorer sent you!

I was a guest of the Institute of Culinary Education, however, all opinions and experiences with delicious fried chicken are my own.