The Art of Frosting Cupcakes at NYC’s Magnolia Bakery

Magnolia Bakery is one of New York City’s most famous cupcake shops.

Highly popularized by the television show Sex and the City, Magnolia is one of New York City’s first cupcake shops, and one that is extremely well-known around the world.

Since its first location opened in New York City in 1996, Magnolia has since expanded to Los Angeles, Chicago, Asia, the Middle East, and Russia.

As you may know, I am a pretty big fan of food. Whether it be Italian gelato, Dutch herring, or Korean dakgalbi, if food is involved, I make my way to it.

When Austrian travel blogger Elena (Creative Lena) contacted me and asked me if I would join her for a cupcake icing demonstration at Magnolia’s Upper West Side location, I jumped at the opportunity to go behind-the-scenes and learn about Magnolia’s signature swirl.

Elena and I arrived at the cupcake shop, made our way behind the counter, and we were introduced to Leona, one of Magnolia Bakery’s best cupcake icers that is well-known for her magnificent swirl and sweet smile.

Leona first began the demonstration by showing us how to properly apply the frosting to the cupcake. With ease and precision, she dipped her magic frosting wand into the bowl of frosting, slid it gently back and forth, and spread it on.

I stood there in awe as she made the perfect swirl. Soon, it was time for Elena and me to try it.

The first couple of steps involved mixing the frosting batter, spreading it smoothly back and forth to eliminate the air, and then swirling it onto the cupcake. Seeing that I was struggling a little with the swirling process, Leona came over to assist.

The final step in the process of decorating the cupcakes involved selecting the sprinkles that we wanted to apply to our cupcakes and sprinkling them gently over the top of each one.

Our lesson ended and I watched Leona go back to work quickly hand whipping cupcake after cupcake. I was simply amazed; she truly mastered the art of frosting cupcakes. 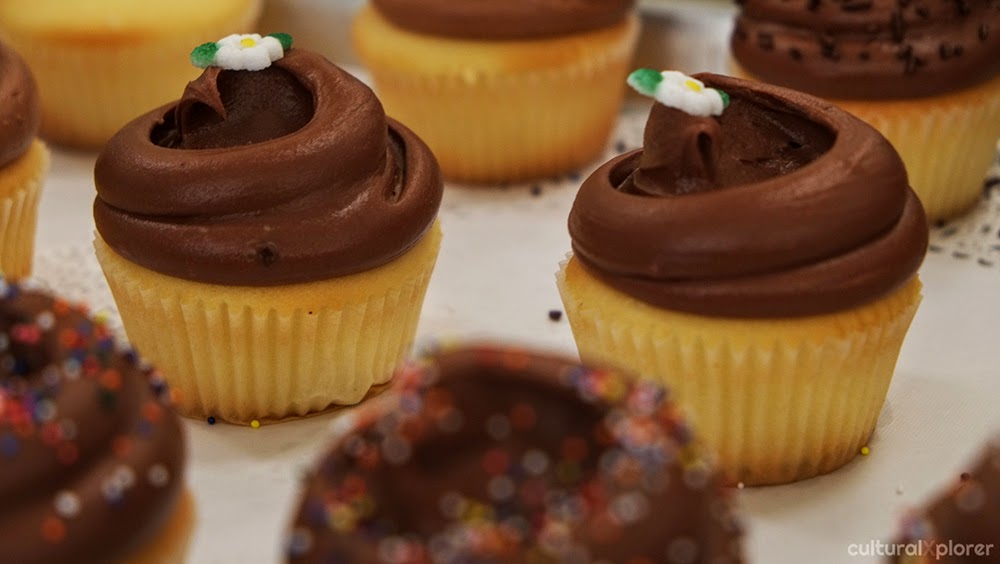 Thank you to Magnolia Bakery for providing a complimentary icing demonstration and cupcakes, and as always, all opinions are my own.