During my short 10 hour layover in Brussels, I aimed to see and do as much as I could within a short time frame.

Being a lover of street art culture around the world, I was very interested in exploring the street art scene in Brussels.

The art scene in Brussels redefines what you might typically think of as street art, with pieces ranging from painted murals, to statues, to shoefiti; Brussels has got it all. 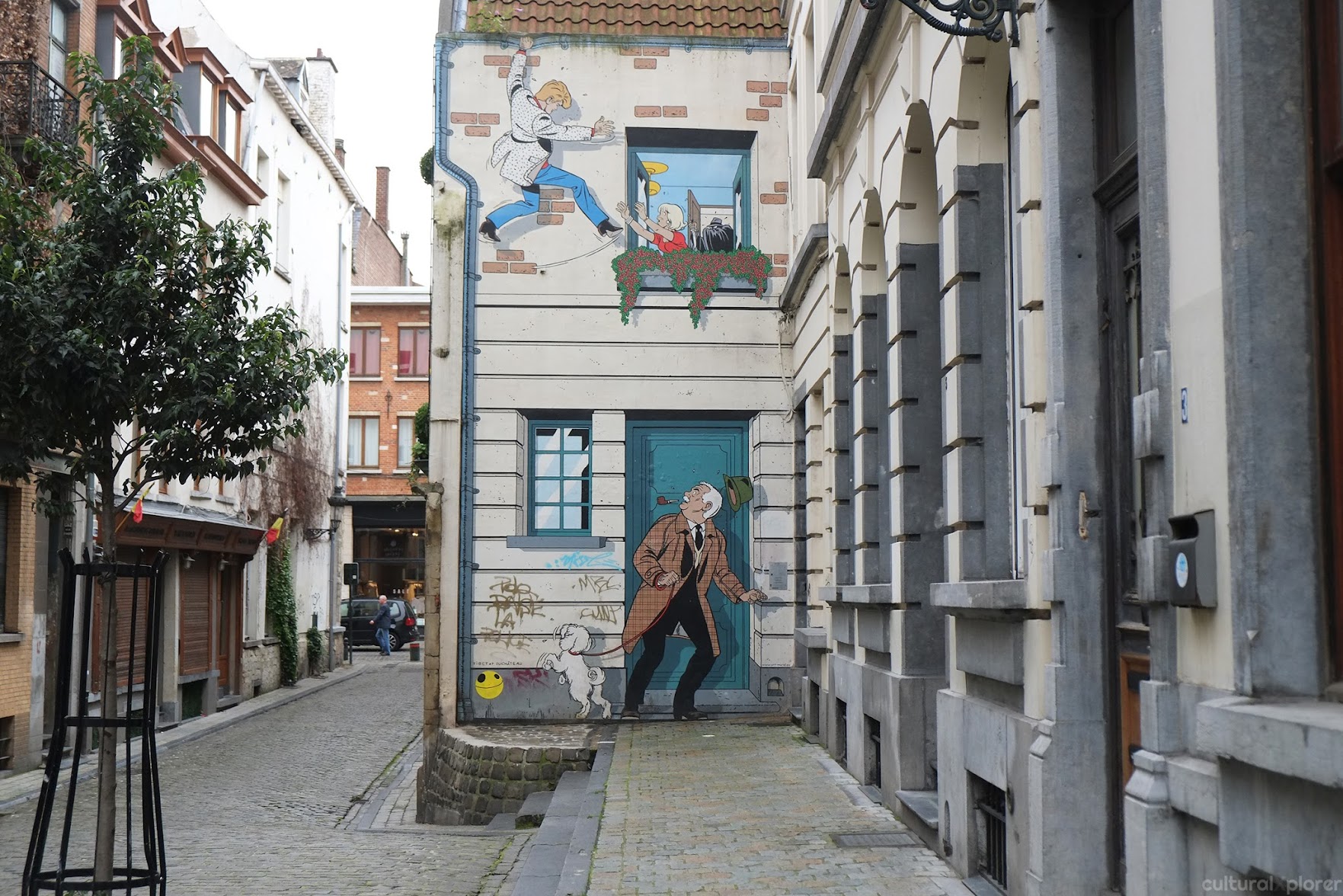 This piece of art by artists Tibet & Duchâteau, entitled ‘Ric  Hochet‘, features a man ricocheting into a lady’s room from the roof. Below the ricocheting man, an older gentleman and his dog can be seen staring up in surprise at the scene above their heads.

This work can be found on Rue des Bon Secours, located near the Grand-Place.

In 2018, it was completely cleaned up and restored with a fresh coat of paint to hide the vandalism and wear and tear that occurred to the piece over the years.

Erected in 1998 by artist Tom Frantzen, Het Zinneke (sometimes referred to as Zinneke Pis) is yet another peeing statue in Brussels which follows in the theme of peeing statues like Manneken Pis and Jeanneke Pis.

The difference between Het Zinneke and its predecessors is that the dog does not actually pee, he just stands in position aiming at the pole.

According to the artist, this dog is a mongrel (mixed-breed dog) and represents the multiculturalism of Brussels.

This little fellow, which has been restored after being hit by a car in 2015, is located on the corners of Rue de Vieux-Marche and Rue des Chartreux.

The often-photographed piece features Tintin, his dog Snowy, and Captain Haddock running down the fire escape.

This piece is one of 40 Tintin murals in the city of Brussels and can be found on Rue de l’Etuve, near the Manneken Pis.

This seemingly strong politically-themed work was found on a wall in Impasse de la Barbe.

Interestingly, the flags have been tagged and are no longer legible, so I am assuming this piece was strongly disliked by someone.

It can be found on the side of the Arlequin Record Shop near the Manneken Pis.

Yes, shoefiti is a thing.

It is defined by the Urban Dictionary as “The artistic expression of slinging shoes tied together by their laces over power lines”.

Curious to know more about this urban phenomenon? Check out this video entitled: ‘The Mystery of Flying Kicks‘ on Vimeo.

Have you seen street art in Brussels?