Hollywood Trickery and The Sound of Music

As my large brown bus whisked me through the Austrian countryside while  fellow bus riders were belting away songs from the Sound of Music, I could not helped but feel deceived, and I had been.

For years, I had pictured the town of Salzburg, Austria to be this magical place full of music and people twirling around in open fields while singing to the tune of The Sound of Music. I was disappointed to find however, that my dreams of the old city were filled with a lot of deceptive Hollywood movie tricks, in which Salzburg became a mix of the city itself, the neighboring countryside, and Hollywood film sets.

The Sound of Music Tour 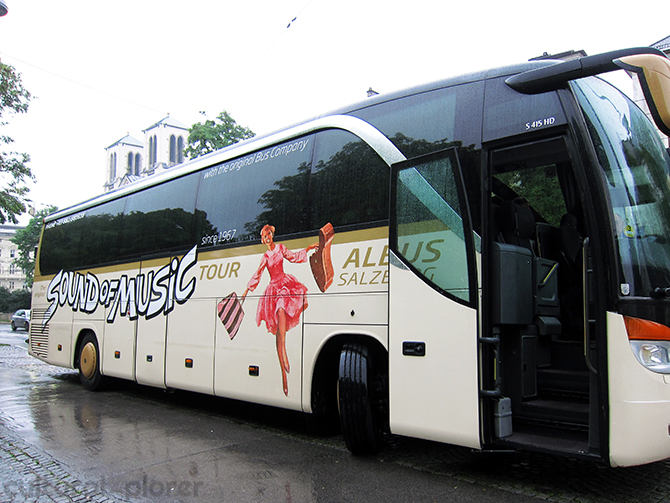 The bus (Albus) – the original bus company used in the movie

I arrived to my bus location early on a very rainy Salzburg morning. I was greeted by the tour guide David, who introduced himself to everyone on the bus and explained that we would be on and off the bus for a period of four hours in both the city of Salzburg and in the outskirts of the city where different parts of the movie were shot.

David told us not to be disappointed with the rain as Salzburg is known for having many rainy days. He went on to say that Salzburg was so rainy that the shooting of the movie in Salzburg was originally scheduled to last six weeks but ended up taking an additional five weeks (for a total of 11 weeks) because of the rain.

Right on schedule, the bus pulled out of Mirabellplatz and headed through the city. David pointed out the different hotels that the cast had stayed at during their filming period. He also pointed out filming locations throughout the city such as the location of the Mozart Bridge (Mozartsteg Salzburg) which the children ran across while singing ‘Do-Re-Mi’, and the Nonnberg Abbey, the convent which Maria longed to be a part of. 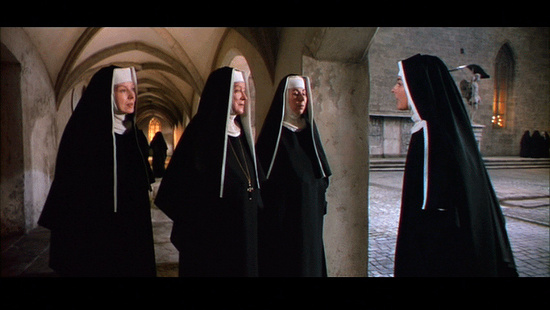 Even the nuns look surprised! (Source)

We continued talking about the making of the movie and some of  the discrepancies that existed between the movie and the real Von Trapp family, whom the film had been made after.

When the real Maria Von Trapp had seen the movie for the first time, she stated that only about 80% of the events that occurred in the movie reflected the true story of what actually happened.

The escape scene at the end, which does not reflect reality

Our tour continued to the Hellbrunn Palace, where we got off of the bus and made our way to a tree-lined path. We were informed that this spot was where Maria sang the song ‘Confidence’ after she left the abbey on her way to the home of the Von Trapps.

We then walked through the main gates of the palace, where we came upon the gazebo that was (partially) used in the song ‘Sixteen Going on Seventeen‘ and ‘Something Good‘.

The lane used in the song ‘Confidence’

We departed from the palace and made our way over to the Palace of Leopoldskron, where we looked at the lake that the children fell into in the movie and learned about how little Gretl nearly drowned during filming.

After leaving the lake, we headed into the mountains, while being instructed by David to sing along to the songs playing over the loudspeaker. The little boy behind me outshone everyone on the bus as he belted out each song word-by-word.

Throughout the tour, David provided us with hilarious commentary and made sure to let us know if we were not singing or yodeling loud enough.

We continued our procession through the mountain bound for Mondsee while passing the stunning Lake Wolfgang in the area of St. Gilgen. I made a mental note to myself to make sure to visit this beautiful lake on my next trip to Austria.

We finally arrived to the last stop on the trip: The Church of Mondsee, where Maria married the Baron.

The Church of Mondsee, where Baron and Maria married

The Sound of Music Tour: Review

Overall, I thought the tour was a lot of fun and singing along to the songs brought back great memories of my childhood.

I do wish there were different time options for the tour, as the four hours  I was on flew by rather quickly. I could have easily spent another four hours riding on the bus and seeing additional sights.

One fantasy that I have had for years has been to spin around on a mountain in a dirndl (traditional Austrian dress)…. unfortunately, there was to be no spinning for me during my entire trip.

Disclaimer: The Salzburg Tourism Board provided me the ticket for this tour, however as always all thoughts, opinions, and yodeling are my own!