2015 flew by extremely fast, faster than 2014 and much faster than 2013. This year, I visited 11 countries, 18 cities, and 3 continents (outside of the United States). I also FINISHED MY MASTER’S DEGREE (which was a journey in and of itself)!

In this year’s travel reflection post in addition to sharing my travels from the year, I have decided to include this website’s Ten Most Popular Posts from 2015 to highlight what people have been reading. Some of the articles will have follow-up articles in 2016 and I cannot wait to share them with you!

In 2016, I have a few trips planned, however, I don’t expect to travel nearly as much as I have been doing over the past three years as I move toward looking for a full-time job in New York City. I will still continue to write about my travels on this site (especially past ones that I have not had the chance to write about to yet) and I also hope to cover more topics about New York City.

Without further ado, here is a look back my travels during 2015….

At the beginning of the year, I spent a lot of time in New York attending different events, classes, and shows around the city.

One show in particular that I really enjoyed attending was the New York Times Travel Show, one of the largest travel shows in the world. In addition to catching up with old friends, I made some new ones, was able to meet with people from destinations that I planned to travel to in 2015, and interacted with different destinations that I was considering for future travel.

Winter in New York City in 2015 was quite brutal (especially February). Due to this adventurous spirit of mine, however, I decided that I definitely did not want to dwindle my winter away by locking myself inside of my house, and thus I decided that I was going to take the opportunity to explore various neighborhoods in my city in a non-traditional way: through staycations.

In 2014, I came across an amazing one-way error fare (glitch) to Tokyo, Japan from New York City for $272, and I could not pass up the opportunity to purchase it! The fare had me traveling through Europe on my way to Tokyo and one of the cities that was on the itinerary was Milan, Italy.

During my 2014 Euro-Trip I had visited the city of Milan and in all honesty, I did not love it, so I did not intend to spend too much time there. I did want to grab some pizza, wine, and gelato however before departing from the city, and I was able to eat all three in the Milano Centrale train station, which definitely made me a very happy camper.

Riding through the Swiss Alps with Rail Europe

During my journey to Japan from New York, I partnered with Rail Europe for my journey between the cities of Milan, Italy and Prague, Czech Republic.

The first leg of that journey included riding through the beautiful Swiss Alps. I do not think I have ever seen mountains as gorgeous as the Alps in my entire life, and I desperately want to get back and explore them!

On my journey between Italy and the Czech Republic en route to Japan, I had a short stopover in the city of Zurich, Switzerland.

I stayed in a cute little hotel called The Flag Zurich and wandered around the city with other travelers who were visiting the city. Although I was only in the city for a short time, some of my favorite memories were taking a boat ride on Lake Zurich, eating and drinking chocolate at the famous Confiserie Sprüngli, and trying Kinder Eggs for the first time!

Getting Cultured in Tokyo, Japan

As you may know from the numerous posts about the city of Tokyo, Japan, I thoroughly enjoyed myself in the city.

I had a lot of fun exploring different neighborhoods around Tokyo including Asakusa. I also really enjoyed trying out different unique themed cafes in the city including the oh-so-fun Robot Restaurant. Finally, I was able to get some rest and relaxation in Yoyogi Park and see the cherry blossoms at Shinjuku Gyoen, I got to see hundreds of different kinds of fish in Tsukiji Fish Market, and I learned how to hunt down cheap sushi in Tokyo.

On Christmas Eve 2014, I caught another error fare to Johannesburg, South Africa for a shocking $317 round-trip, including all taxes!

En route to Johannesburg, I had a 10-hour layover in Manchester, England, where I spent time wandering around the city. Some of my favorite parts of that layover included eating an English breakfast, visiting the Manchester Art Gallery, and stopping by a proper pub to eat fish and chips.

I was so excited that I finally made it to Africa in 2015 (and I still have SO much more to share about it)!

Some of my favorite and impactful memories from my trip included visiting Soweto and learning how to do the popular Pantsula dance, learning about the history of Apartheid at the Apartheid Museum, seeing (and falling in love with) Fuse ODG as he taped the song Top of My Charts in Johannesburg, traveling to the top of Table Mountain, and visiting Cape Point outside of Cape Town.

Exploring Dubai on a Layover 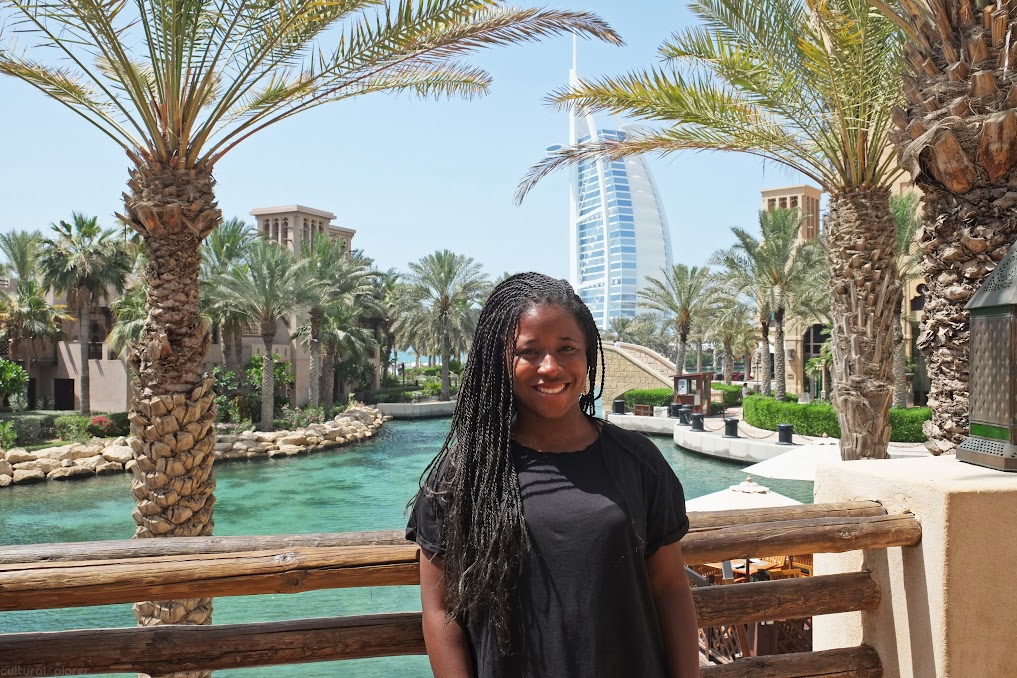 Posing in front of the Burj Al Arab

This year I finally touched down in the United Arab Emirates on my way back to the United States from South Africa. My plane landed in Abu Dhabi and I decided to hop on Etihad Airways’ free shuttle service to the nearby city of Dubai.

I spent 10 hours wandering around Dubai, which gave me just enough time to do a little strolling around the Dubai Mall, going to the top of the Burj Khalifa (the world’s tallest building), and take a Hop-on hop-off bus around the city which allowed me to see a good amount of Dubai in a short time. 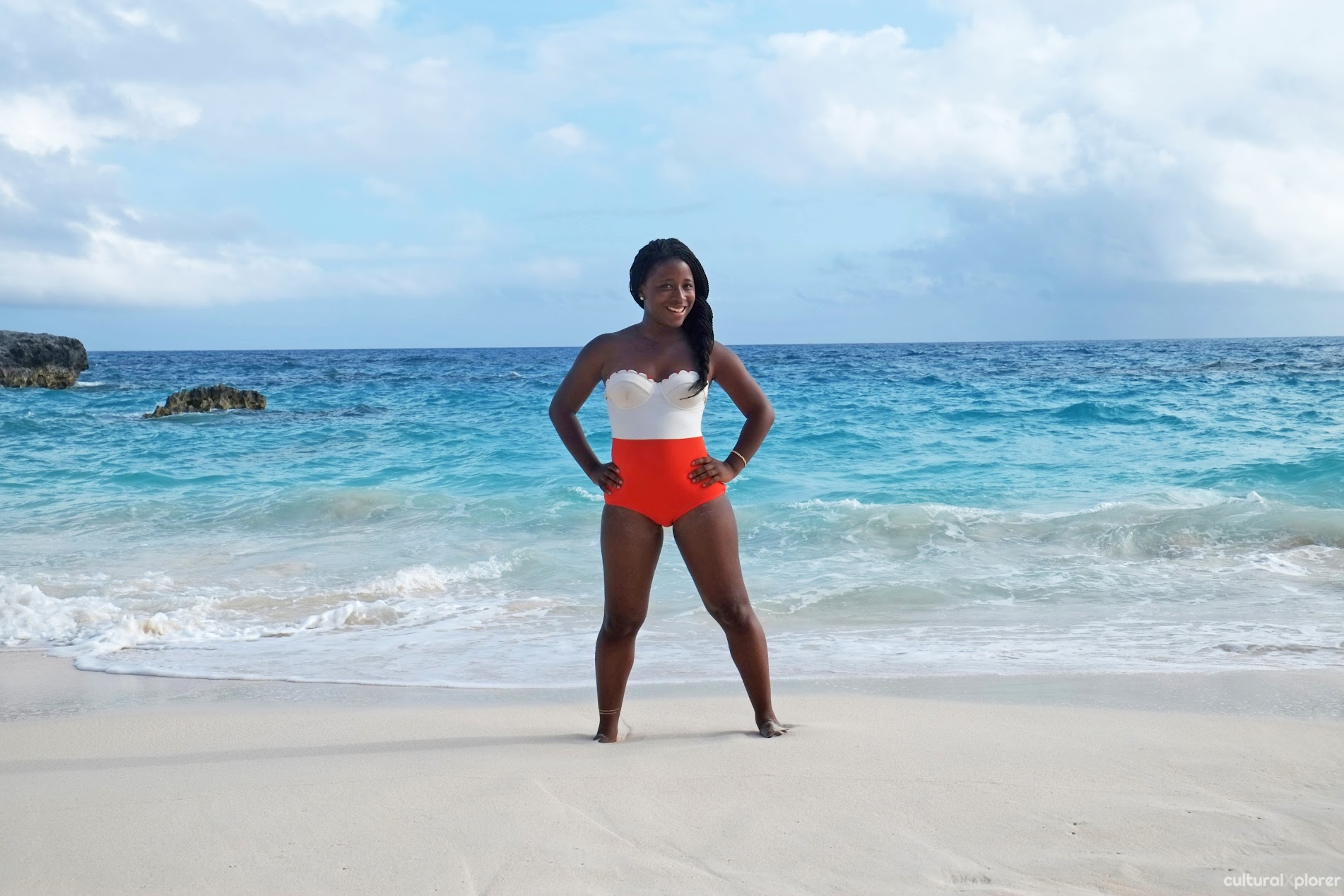 I am a big beach bum

I have already gushed about how beautiful and amazing Bermuda was, and I am going to reiterate that it is definitely now on the list of my favorite destinations in the world.

Outside of participating in Bermuda’s first carnival, some other highlights from my trip including exploring Tom Moore’s Jungle, riding around the island nation on the back of a motorbike, and climbing to the top of Gibbs Hill Lighthouse.

I absolutely love destination weddings and in July I headed to Cancun, Mexico for the wedding of one of my sorority sisters.

During my trip to the Cancun region, we stayed at the beautiful Azul Sensatori Resort in Riviera Maya, we made a brief trip over to Playa del Carmen to experience Mexico outside of the resort, and we took a day-long party boat to Isla Mujeres. It was a fabulous time and it was good to spend quality time with some of my closest friends and sorority sisters!

After leaving Mexico, I headed over to Cuba, where I spent a couple of days in the cities of Havana and Viñales.

I found Cuba be quite easy to navigate and some of my favorite experiences from the trip included horseback riding through the Cuban countryside, watching the sun set at Cayo Jutías beach, and wandering around the streets of Havana.

Visiting Syracuse and the Onondaga Nation

In the Onondaga Nation with Oren Lyons

In the beginning of September, I went on a press trip to the city of Syracuse, New York. I had a wonderful time eating and drinking my way around the city, and some of my most memorable experiences included meeting Oren Lyons (one of the chiefs of the Onondaga Nation), visiting The Great New York State Fair, and drinking a wine slushy (which is basically a slushy for adults).

My trip to the city of Austin, Texas was the only time I left the state of New York for the entire fall as I wrapped up working on my master’s degree.

I was happy to connect with some friends that I had not seen in a while, eat my way around the city, and also try some activities that did not involve eating, such as bat watching.

The most viewed posts written in 2015 on Cultural Xplorer were:

10 – The Best Resources for Train Travel in Italy (February 2015) – A quick guide to riding trains in Italy as well as some additional resources to help you navigate the country by rail.

9 – A Visit to Dachau: Germany’s First Concentration Camp (March 2015) – A story about my experience visiting Dachau, the first concentration camp in Nazi Germany.

8 – A Beginner’s Guide to Exploring Salzburg (January 2015) – A mini-guide to visiting the city of Salzburg, Austria, home to Mozart and The Sound of Music.

7 – 6 Neighborhoods You Must Explore in Tokyo (August 2015) – Tokyo is a massive city, and there are so many different neighborhoods within the city to explore. Here is a look at six neighborhoods you should see before leaving the city.

6 – Where To Eat Cheap Sushi in Tokyo (April 2015) – Sushi is one of the most popular foods in Japan, and sometimes buying sushi can get quite expensive. Here is a mini-guide to where to find inexpensive sushi in the country.

4 – 4 Unique Themed Cafes in Tokyo (May 2015) – When I visited Japan this year, I visited some very unique cafes. Make sure to stay tuned for the second part from my upcoming trip in 2016!

2 –  A Basic Guide to Exploring Santorini, Greece (January 2015) – In this guide, I provide tips for visiting and getting around the beautiful island of Santorini Greece.

1 – A Local’s Guide to Visiting New York City (January 2015) – In my local’s guide to New York City, I list ten things to do in New York City outside of visiting tourist attractions. After writing this guide I realized that there are so many more things to add, so look out for my second local guide in 2016!