I arrived to the WestCord Art Hotel in Amsterdam late in the evening and I was greeted at the front of the hotel by two very fashionable cows, one dressed in a Spiderman costume and the other in a Superman costume; I immediately knew that I was going to be staying in the coolest hotel in town.

Arrival at the WestCord Art Hotel

Arrival to the hotel was simple, efficient, and painless. I checked in at the front desk located right by the front doors of the hotel and I was given my room assignment and keys along with a little bit of information about the hotel. I immediately fell in love with the design of the hotel; there was art everywhere from all of the hallways to each wall, there was not a single empty space. 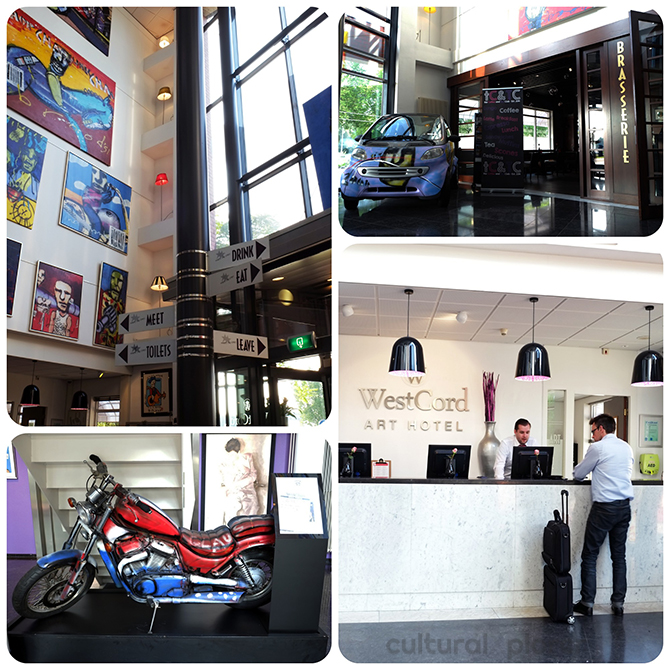 The Suite at the WestCord Art Hotel

The bedroom had a large comfortable bed that was large enough for two people; I really liked the added touch of the artwork located directly above the bed. On each side of the bed, there were two long vertical closets, which provided ample storage space.  Directly in front of the bed, there was a large desk that was suitable for getting work done.  To the side of the desk, there was a fully stocked minibar, a pull-out drawer with tea, coffee, a kettle, and glasses, and a medium-sized flat-screen television. to In front of the large window, there was a large plush couch with a moveable table for relaxation.

The ‘bathroom’ was very non-traditional and was split into two parts: a room with a toilet, and a wash room, which consisted of a sink, a shower, and a bathtub. I thought it was very interesting that the bathroom was split up in this way.

The Shared Spaces & Hallways at the WestCord Art Hotel

One thing that I really liked about the WestCord Art Hotel was it’s openness and shared spaces. The ‘business’ center was even artistic and modern and had a Nespresso machine, a large table with soft chairs, and a computer with free internet access and free printing. 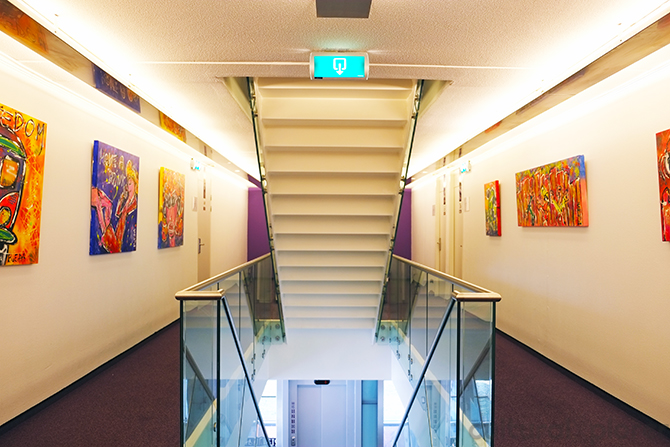 The Food at the WestCord Art Hotel

Generally speaking, in my past experiences I have either not enjoyed hotel food, or thought that it was mediocre. This was not the case for the Amsterdam Art Hotel, where I ended up having a couple of my meals. Even if someone is not a guest of the hotel, I would recommend eating there during a trip to Amsterdam as I feel their food is exceptional.

The hotel has two different dining options The Art Brasserie (restaurant & bar) and The Gallery (which serves breakfast only). There is a large indoor-outdoor dining area (The Terrace) at both restaurants and room service is also available with no service charge.

Food at the WestCord Art Hotel

The Bar at The Art Brasserie restaurant inside of the hotel

The hotel has a number of facilities and provides various amenities:

Location of the WestCord Art Hotel

The hotel is very conveniently located about 15 minutes from the Centraal Station by bus. Two buses stop right in front of the hotel (22 & 48). It is also easy to bike, walk, and drive into the heart of the city.

Disclaimer: The WestCord Art Hotel provided me with a complimentary stay, however all of the opinions in this article are my own.